For the launch of Samsung’s Galaxy S9, Starcom and Vistar Media, in partnership with LiveRamp, took an innovative approach to their digital out-of-home media activation in order to reach consumers ripe for a phone upgrade. 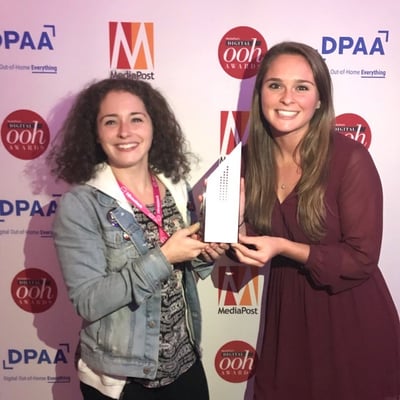 To begin, Samsung passed their first-party customer audience segment to Vistar through our mutual partner, LiveRamp, who anonymized the data to protect customer privacy and made it available for safe targeting.

Using location data and Vistar’s proprietary geospatial technology, we were able to identify this “Upgrader” audience and analyze their movement patterns. Vistar then activated digital out-of-home media when and where they were most likely to be throughout the day, across Samsung’s top 6 DMAs: Atlanta, Chicago, Dallas, Los Angeles, New York and San Francisco.

Finally, Vistar conducted a brand study to measure the impact of cross-screen media exposure on consumer attitudes and behaviors toward Samsung, as well as a foot traffic study to determine the effect the campaign had on actual store visitation.

Over the course of the campaign, Samsung saw a 8% lift in consideration and a 6% lift in purchase intent, showcasing the importance of being able to reach consumers at multiple touchpoints during their day, as multiple exposures led to an increase in impact. Additionally, there was a 15% lift in store visits to telecom retailers that sold Samsung mobile phones, indicating that the campaign successfully drove people to evaluate the upgrade offer and engage with the brand in-store.

Samsung’s Galaxy S9 campaign results demonstrated that consumers exposed to DOOH media were more likely to visit a telecom retailer than those who were not.