WEATHERfx & Vistar Partner to Deliver a Weather-Triggered Campaign for Timberland

Vistar was enlisted to help Timberland increase visits to their retail locations with digital out-of-home media. Timberland wanted to reach a specific audience segment in strategic locations as they moved throughout their day, so DOOH was the best fit for their campaign goals. By the end of the campaign, awareness, consideration, purchase intent, and foot traffic all experienced a significant lift as a result of both weather-triggered and non-weather-triggered DOOH.

The brand had positioned themselves as leaders in the market of apparel designed for “the modern trail” and identified their target audience as outdoor lifestylers. To execute the campaign, Vistar first had to determine who was a part of the outdoor lifestyler audience. Vistar identified and analyzed devices that visited outdoor recreation areas, trendy restaurants, and other similar retailers through the use of passive location data. Once this audience was defined, Vistar analyzed their movement patterns and activated DOOH based on where these consumers would most likely be throughout the day.

One unique aspect of this campaign was the use of weather triggering. Vistar partnered with The Weather Company to leverage WEATHERfx to identify weather conditions that would affect consumer decisions in relation to Timberland apparel.

Weather-triggering was successful in reaching the target audience and driving foot traffic to Timberland stores. After exposure to rainy and snowy creatives - when the local weather conditions were met - the weather-triggered messaging drove a higher store visit rate than the always-on creative. 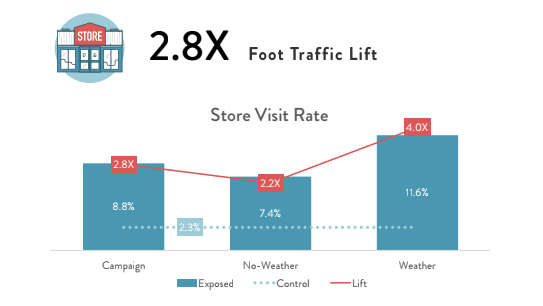 By the end of the campaign, DOOH had helped to drive a 2.8x lift in traffic to Timberland stores. Additionally, consumers exposed to the weather-triggered messaging were 57% more likely to visit than those exposed to the “always on” creative.